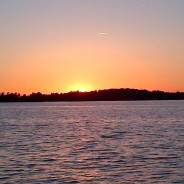 Summer Solstice. Why do I remember? Because one of my dear friends will not let me forget it. It’s his birthday! Every year!

Much more importantly though, this year was the one of the events of the summer which saw his very lovely daughter married at the Beaumaris Club on Lake Muskoka.  Seems to be the year of weddings and key (read 60th) Birthday parties.

The weather was perfect, the food & drinks plentiful, and for my bride & I, we got another chance to enjoy so many of our good friends in a perfect Muskoka setting.

I had the pleasure of hiring this young newlywed many years ago to ‘Captain’ the Moose “On The Water” power boat which ‘sampled’ a myriad of products over the years. She was promoted to manage the entire water AND land programs for Haliburton Broadcasting (logistical hell) for a few years and has since parlayed her intelligent and thoughtful mindset into a budding career in the ad agency business.

Good life and living to you both ! 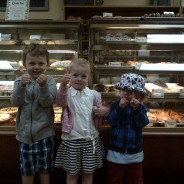 Is there anyone in Muskoka who does not LOVE their local bakery? Ive grown up in Bala and now that I have THREE wonderful grandchildren, (yes, and two wonderful adult girls) there are few journeys I enjoy more than travelling to Don’s Bakery in the boat with this trio of scallywags and cup of coffee.

I thank my lucky stars each time we cross Bala Bay for a ‘bakery run’ to pick up scones, apple fritter(s) , a bran muffin perhaps a pie and donuts often ‘secretly’ eaten on the return voyage.

So it was that after a couple of years of getting acquainted, a month of planning, and the marketing savvy of Jana Foster, we launched the radio career of Bryan Foster of Dons Bakery in Bala. With the help of good friend ‘Nimmer’ at Moose FM – it came together. We sat on the deck outside the bakery and recorded customer “sound bites”, which in my long career of doing this was as easy as pie since everyone is so passionate and eager to help promote their local bakery and their butter tarts!!

Happy to say this campaign will be a success… it’s nice to work with great people and mmm mmm, great products ! 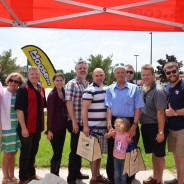 for reasons unknown was my old man’s lucky day, so I adopted that positive position at an early age and have sailed through the years unscathed from bad luck. (Will keep my future fingers crossed for writing this). So it was, that this year we promoted another very successful Father’s Day RADIO event at Rob Clark’s Home Hardware store in Bracebridge.

This year was the 4th rendition with Moose 99.5 FM and it was called the Father’s Day Face Off ( Cdn’s love hockey! ) even though it had nothing to do with hockey ☺.

We qualified 3 Dads out of 20 on air, and had them show up outside the store by the co-sponsors’ Napoleon tent where they NO IDEA what the contest details were to be – a Radio surprise. So we lined them up on brand new fired up Napoleon charcoal grills and gave them each a beautiful steak, a piece of salmon and asparagus (courtesy of Morley’s in Port Carling) to cook on the spot, with a myriad of spice and accoutrement options.
To add the final polish to the promo we had Dave Friesen of Riverwalk Restaurant fame and Esa Paltanen, GM of Sherwood Inn, on location to be the celebrity judges of their final cooking efforts.

Home Hardware Manager Wayne helped with the final details and as per my opening line for Friday the 13th, the weather was perfect and Morning Man Mike mc’d to perfection. A great time had by all.

As I’ve said verbally and in writing probably a thousand times, you only get to do a Grand Opening once (hopefully ☺)…so do it well, make some noise and make it memorable. For those who do not know, I had a non-compete with Vista Radio since my departure as Director of Sales for the Moose FM clan of stations since March /April 2013.

While allowed to operate my North45 Communications Ad Agency, I could not, of course work for a competitor of the many Moosers in the northern regions of Ontario. So it was, that I became acquainted with Jeff Carter who had sold his SureNet Internet business to manage and broadcast a full time gig operating a successful on line radio station Hunters Bay Radio ( Muskoka Online).

Awarded a Community Radio license from the CRTC , Jeff and partners officially launched the station at 88.7 on the FM dial May 15th. A fun nite at the Huntsville Theatre where many people spoke and more bands played live as a tribute to Jeff’s local efforts to make his community proud. I predict this to be one of Canada’s finest Community stations. Give it a listen, on the dial or on line ☺.