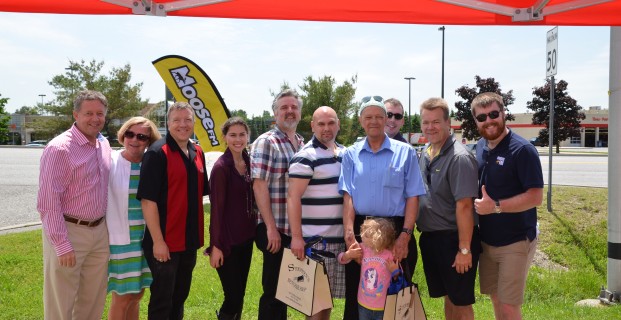 for reasons unknown was my old man’s lucky day, so I adopted that positive position at an early age and have sailed through the years unscathed from bad luck. (Will keep my future fingers crossed for writing this). So it was, that this year we promoted another very successful Father’s Day RADIO event at Rob Clark’s Home Hardware store in Bracebridge.

This year was the 4th rendition with Moose 99.5 FM and it was called the Father’s Day Face Off ( Cdn’s love hockey! ) even though it had nothing to do with hockey ☺.

We qualified 3 Dads out of 20 on air, and had them show up outside the store by the co-sponsors’ Napoleon tent where they NO IDEA what the contest details were to be – a Radio surprise. So we lined them up on brand new fired up Napoleon charcoal grills and gave them each a beautiful steak, a piece of salmon and asparagus (courtesy of Morley’s in Port Carling) to cook on the spot, with a myriad of spice and accoutrement options.
To add the final polish to the promo we had Dave Friesen of Riverwalk Restaurant fame and Esa Paltanen, GM of Sherwood Inn, on location to be the celebrity judges of their final cooking efforts.

Home Hardware Manager Wayne helped with the final details and as per my opening line for Friday the 13th, the weather was perfect and Morning Man Mike mc’d to perfection. A great time had by all.