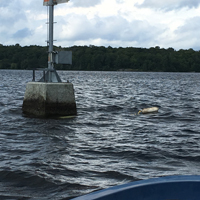 There are several people in my life who enjoy confirming, that on occasion, I appear to have too much time on my hands. As expressions go, there is some truth in sarcasm.

When it comes to grandchildren however, time takes a back seat: schedules altered, creative juices flow, and the desire to be, and feel like, a child again, can be overwhelming.

This past summer during quiet moments alone, thinking about family, an idea was hatched that I knew would take some planning, props and tricky execution. I also knew the grand-kids would love it!

We all know about scavenger hunts, but this nautical version took on a life of its own. The plan was to send my two daughters out in our little 12 foot boat (a ten on the back) with the three g-kids on a hunt for buried treasure. Buried that is, under water! Instructions were printed, placed in an envelope and off they went. Presenting itself, was one of the few perfect, sunny, 80 degree weekend days of the entire summer. Sunscreen galore! To be safe, my bride Pammy went with our two sons-in-law in another boat to keep an eye on everyone. A full family affair. I stayed behind to enjoy some peace and quiet.

The ‘crew’ were directed to drive to four different locations where to begin with, more instructions were found taped under a wooden bridge by the Bala Town Dock. These instructions provided a treasure map to the first of three underwater locations!

What took my time and effort was organizing and ‘placing’ the treasures. New, empty, one quart paint tins were loaded with granite stones and topped up with gummies for the kids in sandwich baggies. The stones added so the tins would sink. Lids were hammered on tight. The tins in turn, were placed in double-bagged grocery bags with more rocks and tied off with pieces of ski-rope and then….dropped into specific locations which were, in turn, tied to…. floating buoys. Yikes! I hoped no other marauding pirates would find this booty and make off with it before our crew arrived.

If anyone had of seen me sinking the treasure, and videoed my actions, it would have been a gigantic viral hit on YouTube. On one occasion, the grocery bags somehow became untied and the paint tin, that I was sure would sink on its own, miraculously floated to the surface as I was idling away from the secret location. Thank God, because had I not seen it, the pirates would still be looking for it! I can only imagine the look on my face! Here I was thinking I had covered every detail, and 20 feet away was a paint can treasure chest, floating away in the wind! I managed to retrieve it and go through the whole process again. One attribute of Muskoka is that granite rocks of all shapes and sizes are beyond plentiful, so I was able to gather more rocks hanging over the side of the boat! Crazy. So I again sank the now very tightly tied off bags with paint can cargo and goodies secured for future discovery, hopefully attached to stay to the floating buoy.

The second YouTube event may have been even more amusing to the voyeur. Difficult to describe, but a memory I won’t soon forget. Out in the middle of Bala Bay is the well-known and dangerous ‘center marker’ (see picture at top). At night, the marker flashes brightly to keep boats away from its shallow rise from the depths. The wind was quite brisk so managing the little boat was tricky in the shallow water. Here I was dropping another treasure into the lake tied off with rocks and a buoy. As the little boat turned, and was pushed leeward, I did not notice that the rope attached to the treasure, went under the boat and towards the engine’s prop which was running the whole time. The next thing I knew, the prop tangled the ski-rope and UP came the plastic bags with treasure attached! I could not believe my eyes. I turned off the engine, swearing several expletives as the wind blew me totally off course and the whole routine had to be repeated yet again. Leaning over the back of the boat, unraveling the ski rope off the prop of the 10 horsepower (which was still attached to the plastic bags with treasure included), I wondered, what would go wrong next? Was an unplanned swim in my future? 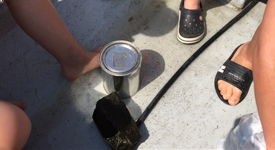 In retrospect, I could not believe that I had brought enough grocery bags to resupply the badly managed paint cans. THAT was good fortune.

In the space of 90 minutes, ‘Murphy’ had once again perched on my shoulder, laughing at me while sabotaging my treasure hunting plans.

My girls were great. They were able to figure out the ‘chicken-scratched’ treasure maps and navigate the route around Bala Park Island, and eventually return home with three children who had worked hard to recover the bootie and eat enough of it to spike their sugar levels.

The reward for accomplishing their tasks? Gran and Grandad took the three youngsters out for a special brunch the following week.

For fun, those of you who have 3 more minutes or so, this Video will show some of the antics that day: taken by my girls and Ava, one of our grandkids.

What will we think of next? Perhaps the secret is to continue to ensure that we DO have a little extra time on our hands, because as we all know… it passes far too quickly.