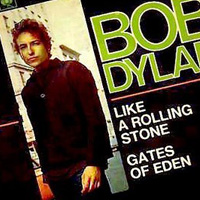 In August of 1965 I was only eleven years old.  I was fortunate enough to be a very young cottager on Bala Bay since 1958 when my folks bought our property.  The only things on my mind in those days were my equally young friends, running around in a 12 foot ‘tinny’ with a ‘ten’ on the back, and having enough allowance to buy worms so I could go fishing.  The way I’m built now, much like my dad and brothers, I suspect food was on my mind most of the time as well, but that is another story.

What went unnoticed by yours truly that August, was Bob Dylan’s 1965 mammoth hit: “Like A Rolling Stone” peaking at #2.  Forty years later, that song was voted the greatest hit of all time by the editors of Rolling Stone magazine.  This summer of 2o15, don’t you know, it’s celebrating its 50th year of fame.

When I read James Adam’s article in The Globe And Mail, it brought back some memories.  You see, a few years later music became a huge part of my life.  I became a drummer; played in a marching band, and in a couple of decent rock bands.  Many stories conjure up here, but I’ll keep on script.

In June of 1981, the world lost our hero Terry Fox.  We had a Bala connection with Terry as he ran through our town on his way to Thunder Bay.  I had run with Terry down University Avenue in Toronto that spring, shirt off, perspiring profusely, large garbage bag in hand collecting donations.  A memory indelibly marked.

So the summer of 81 we threw a pretty big party at our cottage.  Music was a theme of course, but it was also a fundraiser for Terry.  It was quite a scene.  We took my Koss 1030 loud speakers outside and pointed them out on the bay.  Cars were blocked in our driveway, boats tied up at all angles at our dock and overflowed at neighbors.

The one thing I’ll never forget about that afternoon (the party started at noon) , which turned to dusk on the dock, was when, near the end of my “greatest hits” tape, the sound of “Like a Rolling Stone” commenced.  In retrospect, it was almost cultish.  I clearly remember those still partying with us, forming a big circle on the dock, and all of us singing virtually word for word with the author.  Those that did not know all the verses, made up for it on the choruses.

Thanks for the memories.  Hero’s and great writers of music have a way of keeping them fresh in our minds.