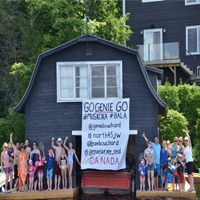 Today folks in #Muskoka, Canadians, and tennis fans around the world, can send our message to #GenieBouchard in #Australia, as she goes to the next level: the quarter finals of the Aussi Open on Tuesday. A tough battle to be sure against #MariaSharapova.

Did I know today is Australia Day?  I must confess I did not.  The official national day of Australia is celebrated annually on January 26, marking the anniversary of the 1788 arrival of the First Fleet of British Ships at Port Jackson, New South Wales, and raising of the Flag of Great Britain at that site, by Governor Arthur Phillip, but I digress…

As my family, friends and many of my associates know, I have been working towards being ‘compliant’ as a (UAV) Drone Pilot.  Both my Co-pilot and I took Ground School a few years back, so, that has helped this process – big time.  Recently, #TransportCanada has, rightly so, altered the law(s) to ensure that drone pilots who are utilizing their crafts for business, are certified and insured.  It’s an onerous process, but it’s worth the effort to get certified.

Which brings me back to Genie Bouchard.  Last spring and summer a lot of folks sprained their ankles getting on the Genie bandwagon.  All good and great for Tennis!  While I had been following Ms. Bouchard’s tennis career since her Wimbledon Junior title, life changed for Genie in 2014.  We loved Genie’s Army in Australia, the French Open, and then, Wimbledon really changed it all. (Yes the US Open was great too, but certainly not as event-filled.)

The picture above tells the story of efforts made by my wife and eldest daughter creating this sign on our dock in the sweltering heat.   When we tacked it up, Genie was really getting going, at the All England Club, advancing so confidently.  Sooo exciting!  Reaching the quarters, the semis, and then, THE FINALS.   I kept drawing the additions to Genie’s success to the sheet up on the boathouse.  Boaters would drive by and honk or wave… So much fun.  People were engaged with Tennis, largely because of Genie.

So now here we are again.  I got a flight certificate  (SFOC)  JUST in time to do this shoot on Sunday…  edit the video, add some nice music and sound effects… all, to send a message of hope, but much more importantly, of CONGRATULATIONS to Genie for her run to-date.

And for the record let’s not forget to support our tiger, with the lethal serve, Milos Raonic , in a similar way.  What I know is, good things happen to good people.  Milos is fantastic, and is in the Quarters now too.  How exciting is that??!!

So all of this to say, enjoy the new Video on YouTube and share it, as a message of Congratulations to Eugenie Bouchard.